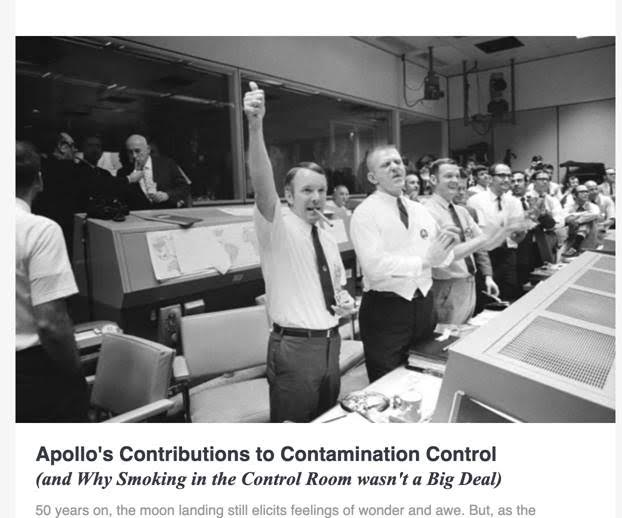 50 YEARS ON: HOW APOLLO STILL CONTRIBUTES TO CONTAMINATION PREVENTION
(and why smoking at mission control wasn’t a big deal)

Recently, the United States celebrated the 50th anniversary of placing a man on the moon and sending him safely back to Earth. The moon landing remains a pivotal, important event in human history. With the trove of newly released footage featured in the recent documentary Apollo 11, it’s hard not to be left with a profound sense of wonder, awe, and pride in human accomplishment. Strangely, five decades on, it’s not the launch or Neil Armstrong’s descent to the lunar surface that is shocking — it’s the footage of workers at mission control chain-smoking and sipping away at cups of coffee. It’s a sight that makes today’s critical facilities’ palms sweat and feel light-headed.

Yes, it’s a stress-filled environment and mission control needs to stay alert, but we’re talking about liquids and smoke near equipment that is crucial to a quarter-trillion-dollar program (inflation-adjusted for 2019 dollars) — how could NASA be so naive and reckless? Before we ask, “Who was in charge of contamination control?” it turns out NASA knew exactly what they were doing.

Without Apollo, we may not have the microchip. And, we certainly wouldn’t have the technologies and cleanroom practices to support such technological innovations. In looking back on 50 years of the Apollo 11 moon landing, Critical would like to draw attention to some of the contamination control practices developed or perfected by the Apollo missions.

PLAN FOR FAILURE, ANTICIPATE ENVIRONMENTAL CHALLENGES
When asked why Apollo-era rocket jockeys were allowed to smoke and drink at their consoles, Anthony Holst, a former member of the NASA Apollo program and aerospace engineer, was dismissive. Holst points out that much of the equipment was hard-wired and the monitors were driven by vacuum tubes, so contamination from tobacco smoke and or the occasional spilled beverage was not much of an issue. Secondly, this was the dawn of the computer age; all equipment essential to get the job done had redundancies. They expected and planned for the equipment to fail. Even redundant equipment came with a backup solution!

There is a great irony to all of this. While we, working in today’s data centers, are so shocked by the footage of teams casually puffing away near critical equipment, an Apollo systems expert dropped into the data rooms of today would be equally flabergasted by the lack of backup plans. In an article published by Data Center Knowledge last year, 80% of the data center managers surveyed revealed their last downtime event was completely avoidable.

COUNTING CONTAMINATION AT THE PARTICLE LEVEL
As a counterpoint to those jarring images of mission control smoking cigarettes, it’s important to point out the great leaps and bounds contamination control achieved during the Apollo mission. Engineers understood that contamination could come from virtually any source and therefore invested in the development of technologies such as the Coulter counter, a device still used to count particle concentration on surfaces. After all, if you’re going through the hassle of collecting moon rocks to analyze their composition, it’s a good idea to make sure those samples are not contaminated with Earth-borne particles.

For data centers and critical facilities, performing particle counts and analyzing the types of contamination reveals not only the seriousness of the contamination, but also helps identify its source.

CLEANROOM STANDARDS
In 1967, NASA’s Contamination Control Panel made a widespread request for experts in the field to develop standardized practices for cleanrooms. One panel member, James W . Useller, would go on to literally write the book on cleanroom technologies — the aptly titled “Clean Room Technology.” Others involved in Apollo’s Contamination Control Panel would later provide instruction on cleanroom standards that are still used in data rooms and critical applications today.